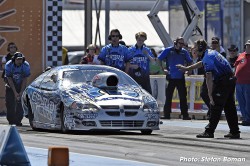 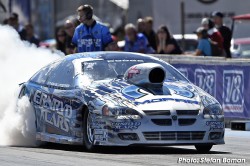 Well. The season have been up side down so far. In the FIA European Dragracing Championship we havent been able to fullfill a complete race cause of weather or track conditions so far into half season.

Main event, santa Pod,England 1st round was aborted due to rain. Its a long way to go to England. 2000km, one way, and its a long way back without beeing able to race.  But weather isnt something that you can blame the track for, so we hope for sunny blue sky for the rest of the season.

Nitro nats, Alastaro Finland 2nd round,  had resurfaced their track weeks beofore the event. And the track became very tricky. Prostock cars that usually goes into the low 6.60 times went al over the place ending up in 7.00 s times. We qualified good, but it was soon over.  The transmission broke on 3d gear for the Swedish Mopar team in round 1, and PB easy took the win. Just shut of the car at 100m and that was it….. Going back home reparing  the car and aiming for a win in the next round seems like a plan.

Hockenheim, Germany 3d round.  Low qualifier!! and Disaster. Once again they have completley destroyed the track and there was no traction what so ever. Tricky track is an understatment.  We where before the race promised a good track, but they couldnt hold their promises for sure. Prostock car drivers got united and after 1st round we decided to cancel the event for our class.  We will see if we ever return. The only good thing with this race is that we did the fastest run and became nr 1 qualifier. And that means Points in the Championship.

But there is good information also. We have been at two Non Championship races this year. Malmö raceway, Nr 1 qualifier with the Dodge, set new trackrecord at the 1/8 mile track. 4.21s and 268km/h was the fastest run that weekend, the fastest 1/8 mile run so far this season, and only thousand of a second from the European record.

Tierp arena. 6.61s 338km/h right out of the trailer set the bar so high the others couldnt get over it. Fastest run that weekend felt good.